Moonshine Riches is a jazz-influenced slot machine from Swedish gaming giant NetEnt. It can be played on all types of devices from as little as 0.1 € up to 45 € per spin. The game’s special bonus features are 3 in number: Ricochet Reward, Territory Takeover Spins and Bootlegger’s Bounty Bonus. In keeping with the jazz theme, the game is designed with elements of the dominant aesthetic direction of 20th-century art deco and is set in a jazz club. The soundtrack also consists of swinging jazz of the kind enjoyed by the party people of the time. 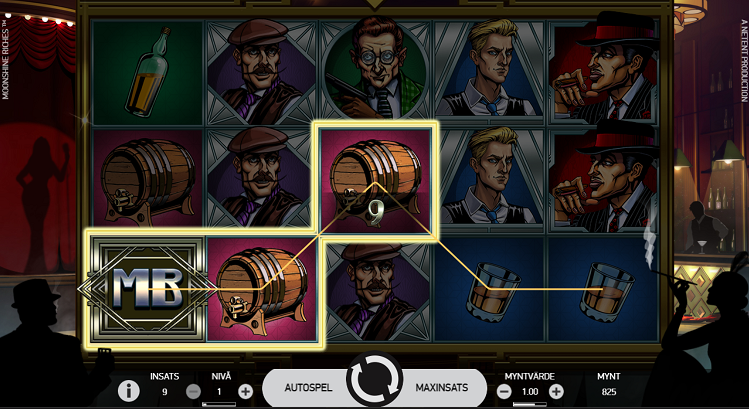 The game’s 5 reels and 3 rows are adorned with what can only be assumed to be the jazzy clientele that frequents the club, as well as whiskey glasses, beer barrels and bottles. The former is highly valued, the latter low. The wild symbol appears on reels 2, 3 and 4 and can substitute for all symbols except the bonus symbol of the bottle. The reels’ motifs can coincide in a total of 9 pay lines.

So to the slot machine’s bonus features. The Ricochet Reward is awarded for landing the bottle on different rows on reels 1 and 5. One of the two bottles then turns all other symbols in the row into the same random symbol. What the reward is, of course, depends on which denomination of the motif you’re lucky enough to get. Territory Takeover Spins is the main attraction of the game and is obtained by getting the bottle on the same row on the first and fifth reels. The reward is 5 free spins where the pay lines go from left to right and vice versa, plus the wild symbols become sticky and persist between each spin for as long as the bonus round lasts. Should you be unlucky enough to walk away from your free spins empty-handed, the Bootlegger’s Bounty Bonus kicks in, giving you a number of spins where you have the chance to win between 10 to 75 times your total bet.

We provide the very best online casino bonus on Dreamz Casino. Sign up and claim your welcome bonus!